Understanding Hyperinflation in the Weimer Republic 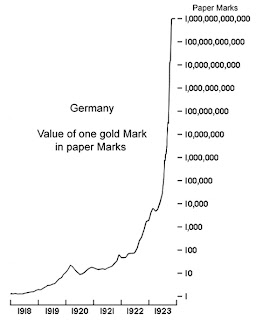 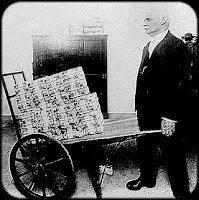 This book is so scarce that a used copy costs $800. 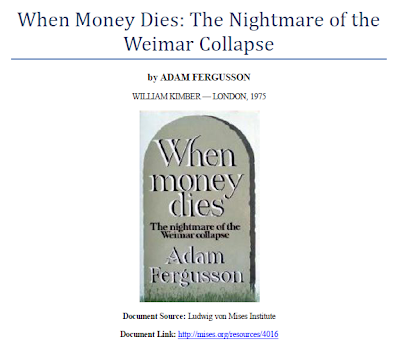 "The permanent economic crisis was a result of lost pre-war industrial exports, the loss of supplies in raw materials and foodstuffs from Alsace-Lorraine, Polish districts and the colonies, along with worsening debt balances and reparations payments. Military-industrial activity had almost ceased, although controlled demobilisation kept unemployment at around one million. The fact that the Allies continued to blockade Germany until after the Treaty of Versailles did not help matters, either.

The allies permitted only low import levels of goods that most Germans could not afford. After four years of war and famine, many German workers were exhausted, physically impaired and discouraged. Millions were disenchanted with capitalism and hoping for a new era. Meanwhile the currency depreciated."
Read More at WIKI.
Posted by Chalcedonite at 1:12 AM No comments:

Visit msnbc.com for breaking news, world news, and news about the economy

Posted by Chalcedonite at 1:53 AM No comments:

**On the NEWS**: Merkel introduces ban on naked short selling from midnight tonight
**On the NEWS**:  There are $250 billion in naked CDS outstanding; they have 4 hours to unwind . . .

Read more »
Posted by Chalcedonite at 11:52 AM No comments:

Charlemagne and Currency: The King Father of Europe

In 787 Charlemagne established a new system of currency, higher standard. England’s King Offa adopted this system. It was so sound that it was continued to be used until it was dropped by the United Kingdom in 1971.
http://books.google.de/books?id=bQlJP9O9hKkC&lpg=PA97&ots=Rifs9N_c1b&dq=John%20J.%20Butt%20charlemagne%20mint&hl=en&pg=PA99#v=onepage&q&f=false

Posted by Chalcedonite at 7:07 AM No comments:

Here is the "apt" Ron Paul talking about how Ben Bernanke (FED) is creating something far worse… a currency crisis.

apt:  unusually intelligent; able to learn quickly and easily, suited to the purpose or occasion

Posted by Chalcedonite at 12:10 AM No comments:

Economics for your Children:

Teach your children not to be debtors.

Look up the laws of economic liberty

Liberty's Dictator, our triune God, tells us His law word needs to be established in every area of life. Economics is one of those areas. The world economy today is doomed because it's two classes, the hosts and the parasites, are morally and religiously corrupt. Instead of being a participant of that fiat law order of economic private property destruction (sooner or later); recognize, learn, and establish the law that is regenerating (to name a few):

Murray Rothbard, What Has Government Done to Our Money? http://mises.org/money.asp